Because I've never heard of any species of Orthphytum which has yellow flower before.
So, when my Orthophytum supthutii that I've kept for year is going to bloom,
I see the young flowering bubs are yellow

I would like to see the literture or description of this species, please?

I think tomorrow, some flowers will open, then I will take the pic to post later.
I would like to meet new friends in other part of the world and would be glad to trade plants or seed from this part of the world.
Nach oben

The 3rd days of blooming, the first flower has been opening.

I had already received a copy of its literature from Derek Butcher.
It's very interesting to know that Orthophytum supthutii had been identified
as Cryptanthus duartei before

For one who would like to read the story...

For almost 40 years Cryptanthus duartei L.B. Smith has been the object of speculation and mystery since it is the only species of the genus with orange-colored petals. Collected originally in 1949 in the Serra do Cipo, Minas Gerais State, by Apparicio P Duarte, the species was presented to science in 1955 being named after its discoverer. This bromeliad has never again been collected despite the intense botanical work that has been carried out in the area where it was found, today a national park.

As a mandatory step in the work of revising the Cryptanthus genus, we had the opportunity of examining the isotype of C. duartei deposited in the herbarium of the Rio de Janeiro Botanical Garden. Although we were dealing with a dried specimen composed of fragments, it was possible to recognize the presence of two well-developed appendages at the base of its free petals, which characteristics were not observed in the original description. The fact is sufficiently relevant to alter the concept of the species, requiring a transfer to the genus Orthophytum.

When compared to species of the Orthophytum genus, Cryptanthus duartei was found to be similar to O. supthutii E. Gross & W. Barthlott, described in 1990, also collected in the Serra do Cipo, and also having orange-yellow petals. Although the original description of this species indicated some distinctions, we noted after re-examining the holotype deposited in the Herbarium Bradeanum that such differences were simply the result of faulty interpretation of identical morphological characteristics.

We confirmed that observation by examining live specimens collected by the biologist Pedro I. Nahoum in the same microregion. For these reasons, we conclude that O. supthutii, which in 1990 had impressed us because of the never-before-seen color of its flowers, is not botanically different from Cryptanthus duartei.

Taking into consideration the impossibility of a new combination for Cryptanthus duartei since there is Orthophytum duartei, a distinct species also described by L.B. Smith, we must adopt the next available valid name for the species, as follows:

According to available information, Orthophytum supthutii is a species of restricted distribution even within the limits of its area of occurrence in the region of Serra do Cipo. For that reason, the long silence and uncertainty about its true identity should not be found strange. It grows in small populations on rocky walls at altitudes of more than 1000 meters. The plant varies somewhat in size, presenting a delicate appearance as a rule. When sterile, it resembles Orthophytum amoenum (Ule) L.B. Smith because of its size and the green and lustrous leaves. When in bloom, however, its orange-yellow petals have no equals in this genus...."


And in the other paper

In course of a journey in February 1988 through the state of Minas Gerais, a remarkable dwarf terrestrial (epilithic) bromeliad was observed. Slides and a description of the plant were subsequently sent to Elton M.C. Leme (Rio de Janeiro), the specialist in Brazilian bromeliads. He informed us:

". . . it is really different from everything I have ever seen. As far as my knowledge is concerned, it is not closely related to any other known species because of its petal features."

On the advice of E.M.C. Leme and W. Rauh (Heidelberg), we decided to describe this new species:....

...Orthophytum supthutii is a striking new species that seems to have an isolated position within the genus Orthophytum. The determination, with help of the key in L.B. Smith and R.J. Downs (Flora Neotropica 14/3, 1979), leads to O. navioides (L.B. Smith) L.B. Smith but that species is quite different from O. supthutii. The latter differs from O. navioides in the following characteristics: Leaves only 15 cm long, beneath very densely white lepidote, above green, not 30 cm long, obscurely lepidote and reddish. Inflorescence with many flowers, not few-flowering. Sepals only 2 cm long, not 3 cm. Petals bright orange-yellow, not white. Ovary up to 10 mm long, not 5 mm. Further collections must show if we have to erect an own subgenus for O. supthutii.

The plant is dedicated to D. Supthut, director of the Stadtiche sukkulentensammlung, Zurich ( Switzerland), who is very interested in xerophytic bromeliads...."
I would like to meet new friends in other part of the world and would be glad to trade plants or seed from this part of the world.
Nach oben

Hi Chanin, thanks a lot for the nice pictures and clarification. Would you mind uploading the pictures to the bromwiki? These seem to be the first pictures on the web showing this species in flower.

For completeness, here is a previously posted picture of O. supthutii I took last year in Zürich, of what I believe is the type clone. I am not aware if it has ever flowered. 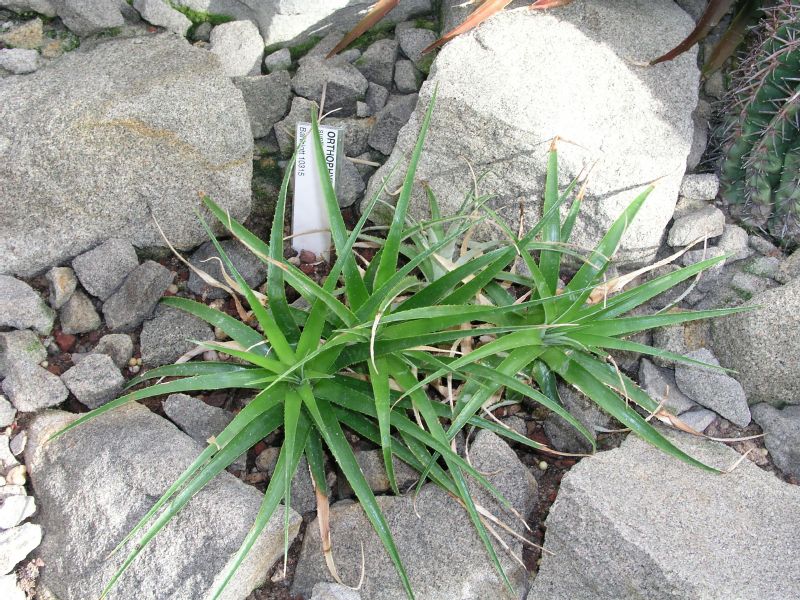 Hi Chanin and all other Lovers of Broms,

At the Moment the Plant at ZSS are full in bloom.
Its a very nice Flower from a slow growing Plant. Congratulations. And the flower color is clearly distinct from that of Chanin's plant. What a special species. Unfortunatly it seems to be quite delicate and slow growing, at least under my conditions. Would be interesting to know who else cultivates it.