Hybrids are an easy task when we are Dyckia linked. An orchid may take ages and ages and ages ahead turn to be a deception in most of the cases. Dyckia hybrids are fast growing and an easy task to make. In just one year of good and correct care a Dyckia hybrid seedling may be this fine:
[align=center]Dyckia goehringii and Dyckia brevifolia Ribeirão, both collected:[/align]
[align=center] 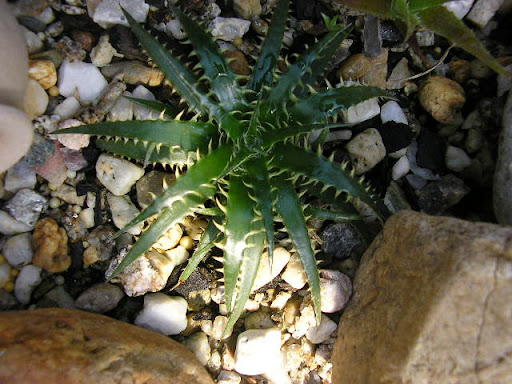 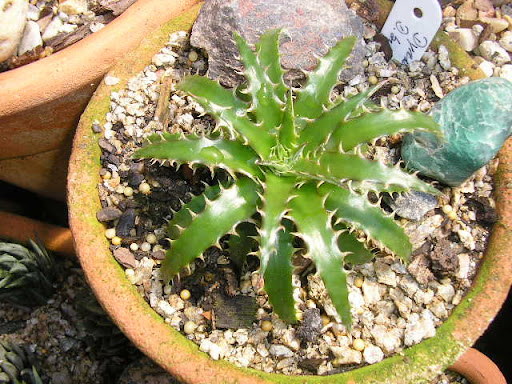 Yes I agree with you and it's really fun job in our short live.

Dyckias reproduce by the thousands, and even if we look straight into a box full of seedlings we are bound to see some individual differences. In nature it is very hard to find new seedlings. Sometimes many years pass without appearing new seedlings in nature. A new plant is always to be celebrated in nature. There are so many enemies in there. The humans have brought new enemies they, the Dyckias, can not cope with. Crops, cattle, fire, timber, strange grasses and strange trees. In Rio Grande do Sul I saw three sites being destroyed by the taking of the stones to be crashed or smashed for the civil construction ( house construction). In our boxes the seedlings grow in such a profusion they must struggle to compete for light. I also learned that the more frequently you transplant a seedling the faster it grows. Dyckia seedlings love to be transplanted every three months and the earlier a seedling gets alone the more strong and perfect the plant will be. So give your seedlings space and room and they will get better and better. I also came to another conclusion on Dyckias: Dyckias are more than enough for only one human being. If I want them in the best I have to get rid of many other time consuming plants. Unless I have an army of helpers the undesired invasive plants will take place of everything. Just to pull the undesirade invasive plants which seeds came with the wind and germinate on the Dyckia pots will take an eternity to win this battle. The urge for a pristine Dyckia presentation is a time consuming and an exaustive job. Dyckia must be replanted constantly for they have the hability to get bonsaied in old substrate or small pot. Abused Dyckia are far too commom to see in pictures. Let´s do the calculi: if one has two thousand pots ( this is not that much, I´ve seen much more.) how many this guy has to transplant in a single day every day of the year around if each one ought be transplanted every year? Add to this the potting of new seedlings and the new plants and..... and soon the poor guy will have no spare time and will live alone with no family, no friends no nothing.....so we must be picky! Seletiveness is the key here.That´s the point: to be picky. Cultivate just the small ones, or just the red ones, or just those huge ones or the rarest, the strangest or the more beautiful ones or .....or the poor guy is bond to be lost without any spare time and any spare room, any family and any friend. Planet Earth will be small for so many Dyckias......My .........uhau! That ´s tooooooooooo much! Let us get professional? No way! Profetic is much easier it is enough to just have a glimpse over a big colection and to be sorry for the guy´s family, life and........uhau. I do not want this to happen to me for as much as I can really like the Dyckias. No way!LET US GET PICKY! SELETIVE!
Nach oben

Chanin, the striped ones on the 2nd picture look like Dy. macedoi, right? Are these seedlings?

To play with genetic pool is a challenging work and definitely need an only few chance to be lucky,
so the point is...the more you have the more chance you win the prize

You never know which seed will turn out to be the extraordinary plant, right?
I can not resist to let them be aborted !

Yes, Joachim those are F2 seedling of xDyckcohnia 'Conrad Mortan' which has Dyckia macedoi in their blood.
And you could notice that the red one is also from the same crop

that why you need to play a mean hybridizer

Yes it is a temptation

Dyckias do have many faces and this happens this way, one out from a thousand may be the road to heaven but it takes time all the time one mortal guy may spare. So dyckias alone are much than enough. Yes and yes one who sews too much must do the culling and this is not a happy job.
We here are learning to maintain dyckias in open areas in the garden. Sunny spots are their terrain and grounds but in Joinville we have one of the highest humidity degrees of the entire planet. A tropical rain forest is a sand desert when compared to Joinville. Here the climate is for anthurium, Crotons, laelias... It is a challenge to cultivate dyckias here. Meanwhile, 50km away we have native dyckias.All of them hight in the mountains or close to the sea where the humidity is much lower than here. But watch out carefully my friend, sooner you will be up to the top with thousands or millions of dyckia seedlings...and man...that is too much! Then everything may run away from our dreams....
Anyway , your plants are ever fantastic.
Here we are discovering new beauties and as soon as the summer come we will search for more. Southern Brazil may be dam cool out of summertime.
Nach oben

chanin hat geschrieben:Yes, Joachim those are F2 seedling of xDyckcohnia 'Conrad Mortan' which has Dyckia macedoi in their blood.
And you could notice that the red one is also from the same crop

that why you need to play a mean hybridizer

well, at this point I would sit down with a cup of good tea, take the original Dy. macedoi and the best-looking of its hybrid and ask myself: Was it worth it? It certainly was in the sense that now we know what the hybrid looks like. But compared to the original, pure-species Dy. macedoi there is no improvement. It's just a curiosity to have a bigeneric hybrid but that's it. Consider the risk of a lost label of a hybrid plant and the similarity to Dy. macedoi and you can easily imagine the risk of the hybrid being distributed as the pure species. Maybe in this case the inflorescence would tell, but still there is a risk.

I would probably not keep the hybrids, at least not distribute them. Instead I would concentrate my efforts on producing pure seeds of Dy. macedoi, if possible, and spread this phantastic rarity. Or try to produce as many offsets as possible. The value (not economic) of the pure species is much higher, especially if we hear how rare and threatened some are in habitat.

I do agree with you. There should be efforts in order to keep the pure strain but the way to do so may lead to the hybrids or pass close to them. If the hybrids as for instance the hybrid orchids Laeliaocatleyas are much more resistant and much more prettier and easier to be found than the true plant... and the true one will live unmolested by poachers and smugglers. Today here we find the laelias on rocks and trees even in the urban trees and nobody cares to pick them simply ´cause the hybrid in the floricultirist is so cheap and pretty.... In native habitats, in native grounds an hybrid may preserve the true species, It happened so with orchids and history repeats itself! ..but this is just a maybe,OK?
Also, and this must be very disastrous, the plants taken as true outside Brazil, in the their big majority makes me " lagh mich caput" ´cause the guy points out the plant and the worldwide well known producer, produces and presents something tottaly different than the plant, the true one. I see this. Some of your true fosterianas and brevifolias got strange names or abandoned their clothes long ,long, long ago. Even in respectful well known Botanic Garden it is easy to find errors, mistakes, confusion, misleads and so on and on. Here we also committe many mistakes but the poacher and the smuggler and both can be a well known collector or a famous scientist this one is bound to fake intentionally!!!!!!!! For one good reason " MONEY!!!!!! OR MONEY AND FAME OR JUST FAME.
I just saw a picture of a well known German Botanic Garden and the tag said clearly: Dyckia altissima and the plant was clearly a Dyckia brevifolia. I tough when I saw the pic: Oh finally a pure brevifolia, it so hard to see it in pics outside Brasil...but then I saw the tag.....oh, no!
Imagine, meine chatz, the big babel tower......
If you buy, if you pay for a Dyckia from Brazil to a Brazilian guy .....hummmmmmmmmmmm be extra extremely caution for two big reasons:
By the Brazilian LAW it is a crime to send any Dyckia abroad!!!! These are all endangerd plants!!!!! IF YOU ARE CAUTGHT WITH SUCH A PLANT IN YOUR CAR AND THE PLANT IS NOT POTTED YOU ARE GOING TO JAIL. Our prisons are famous for their cruelty. They are Dante´s inferno! You with a single plant will have no right for bailing!!!!!! Imagine!!!!!
Plants from the Cerrado are extremely saughtafter abroad and some guys smuggler the plant easely via Brazilian Post as the Sedex Mundi and also via some other companies as DHL and so on. The guy will send anything as being that one so desired plant by the guy in Bucarest, Tokyo, Amsterdan if money is in between them. Botanic gardens that trade plants? Hummmmmmmmmm........ Be very atemptive! Think twicely! When money or notoriety is playing its role one must not forget: diamond is not glass nor ice.
So the pach to the reallity to a good and honest reality may pass close to the hybridizing as it has done with the orchids and more recently with the cacti and still more recently with the bromeliads and now an updated plant: Dyckias.
The same thinking: Who do you think is the one who sets amazonian on fire or cuts down the forest? I know who: the one is the rich healthy guy in North America, Europe, Asia and so on. Those who feed on Brazilian beef and builts with Brazilian timber (houses and furniture)are the ones to blame. If no one feeds on our beef the large white cattle would not go up the country into the amazonian devasted and burned jungle..... if the dyckia hybrids were at plenty no one would care for the migger and difficult to adapt native species. Or if we managed to culture the true ones by the millions who would face scorpions, mortal mosquitos, snakes, murderes and the LAW?
We are all linked our house is the same and now I see, talk, listen to my next door neighbuor and my next door neighbour is YOU!
Good mornig! Come close to the fence....let us talk..let us see each other....gimme your hand.....I am your neighbour....sure I am....Cheers.
Nach oben
Antworten
8 Beiträge • Seite 1 von 1