I would like to hear from others about how they grow the xeric genera - Puya, Dyckia, Deuterocohnoia in particular.

What do you want to know in particular ?
Soilmixes, growing from seed, propagation ?

Actually I wnt to know all the details, because different people have different methods! The most successful growers of Dyckia that I know grow them in a rich soil and give them plenty of water. As for temperature, here I let them get down to 3 or 4 degrees Centigrade with no harmful effects that I see. No one way is necessarily the only way to grow auccessfully!
Nach oben

It is very interesting, that Dyckias seems to be that hard. They are easy
to grow from seed. If you are interested, I do get seeds every year,
which I don't really need. I could send you some over, but you need to
wait a little bit.

Thanks, but I get seed from the BSI seed fund - I have quite a few growing right now! As for the hardiness of Dyckia - some parts of Brazil get occasional frost, enough to kill coffee plants. Also, if any are highland plants this would also account for resistance to frost. I have noticed written acounts that say Brazilian plants are often resistant to low temperature but Caribbean plants are not.

mosasaur hat geschrieben: One more thing. From what I can tell, Fascicularia and Ochagavia are available in Europe, but here Fascicularia is very hard to find (I do have one) and Ochagavia is not obtainable. Do they prefer cool summers? 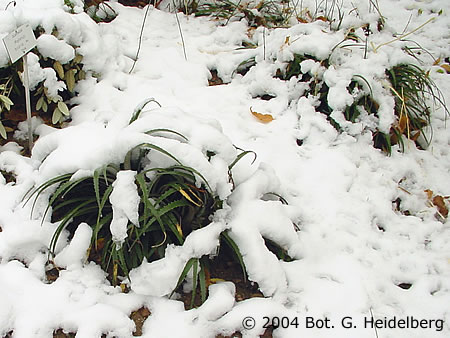 Hi Bromelian these are some xerophytic bromeliads in my collection, Bangkok city, Thailand

<a><img src="http://i40.photobucket.com/albums/e240/ ... ction2.jpg" border="0" alt="Image hosting by Photobucket"></a>
I would like to meet new friends in other part of the world and would be glad to trade plants or seed from this part of the world.
Nach oben

This is an awesome, Hechtia glauca from Mexico

One of the most curious, Dyckia estevesii with its distichus fan-shape leaves. I really don't want to talk about how much they cost!!!

An unnamed hybrid from William Baker. I got two seedlings via my friend last year. I can't imagine how beautyful it would be when mature growth.

These little gem, Dyckia choristaminea, typical form and small form. I really like them and hope to see their nice golden blooming!!

Both are Dyckia fosteriana, different cultivar; 'Silver Queen' above and 'Bronze' bellow, they came from Michael Bromeliads years ago, never bloomed for me!!

These gorgeous bigeneric hybrid, x Dyckcohnia 'Conrad Mortan'. They just showed me their mauve tint on silvery leaves after I gave them more direct sun.